The world of aircraft has changed a lot since the invention of the first aeroplane. The invention of the jet engine plays a huge role in this change. Jet engines are pretty complex pieces of machinery and here is how they work: A jet engine hurtles through the air at around 1000km per hour. Picture 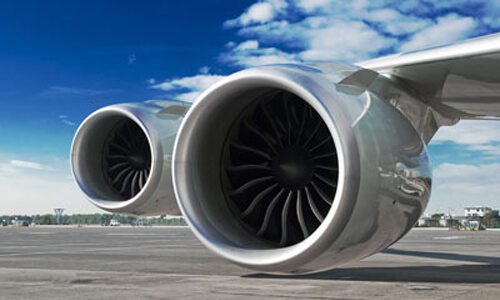 A jet engine hurtles through the air at around 1000km per hour. Picture the engine not moving at all though and rather that the air is moving toward it at 1000km per hour.

The air is sucked into the front by a fan and it is forced through the inlet. The air is slowed by this process by about 60%.

The fuel is then squirted into the engine. The fuel tanks are found in the plane’s wings.

Behind the compressor is something called the combustion chamber. The fuel and the compressed air mix and ignite. This burns fiercely and releases hot exhaust gases causing a huge increase in temperature, around 900 degrees Celsius.

The exhaust gases are forced past a set of turbine blades and the blades then spin. The gases lose energy when they cool down, and the pressure is decreased.

All 3 parts are connected to a long axle that along the middle of the engine. When the turbine blades spin, they turn the fan and the compressor.

The gases are then expelled out of an exhaust that has a tapered end. The tapering of the exhaust is what makes the air accelerate to a speed over double that of the air coming into the engine. This is what powers the plane.

If you are still unsure how a jet engine works, here is a brief recap on the different parts and what they do:

The compressor: Increases the pressure of the air as well as the temperature, creating perfect conditions for combustion.

The combustion chamber: The fuel mixes with the air and ignites. The fuel air mixture burns at 900 degrees Celsius.

The exhaust nozzle: Propels the plane forward because of the gases exiting it at an extreme speed, more than double the speed of the actual plane.

If you are looking at a career in the wonderful world of aviation, DTM Aviation Training provide courses on all types of plane engines so that you can learn exactly how they work, what problems can arise and how to fix them.